Would you like to take a look at the projects we support? 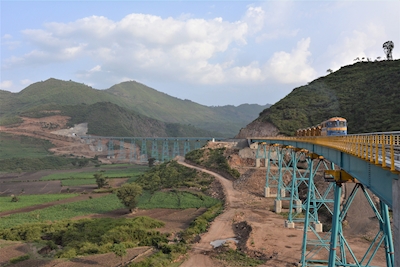 The aim of the project is to establish a central corridor between the northern, central and eastern regions of Ethiopia and other railway lines by forming an important corridor for both passenger and freight transport. The first phase of the project was completed in 2017. We provided financing support for the project worth a total of USD 300 million where the overall project cost will be USD 1,7 billion.

After the completion of the second phase, there will be an increase in passenger as well as goods transport. The products will be transported to the domestic markets and by providing access to the ports to the international markets. Also, the project will create jobs and increase the mobility of the workforce. In addition, thanks to the railway network that will be formed with the completion of the planned railway projects to be realized in the future, it will contribute to the integration of both Ethiopia and other countries in the region with the world. 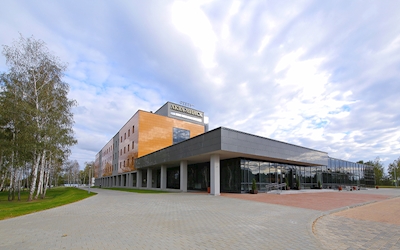 The Aquapark Hotel built in the capital Minsk as per the program launched by the Belarusian State for the development of the tourism sector. We provided USD 9 million loan where the project cost was USD 11,5 million.

In addition to the hotel complex, which has a total area of 6,500 square meters, it also has a water park with baths, water-related pools, beach entertainment areas and catering establishments, providing accommodation for 218 people. 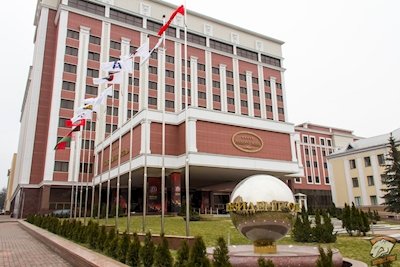 Within the scope of the project, the closed area of 8.280 square meters of the Oktyabrskaya Hotel, which is located in Minsk, has been increased to 38.600 square meters and the hotel has been upgraded to the five-star standard. In addition to the renovation of the existing hotel, meeting rooms, restaurants, swimming pool and sports center have been constructed.

We provided USD 51 million loan where the project cost was USD 60 million. 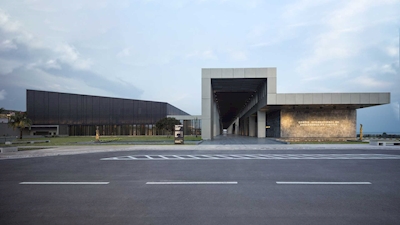 Republic of Congo has no such a multi-functional congress and exhibition centre in use for performing arts, public shows, international fairs or huge events. Development of such a meeting facility is expected to create an attraction centre not only within the country but also around the neighbouring countries. The running Congress Complex will also increase the employment capacity of the region significantly. The hotel and congress centre will employ 200-250 people each year and the facility will support additional jobs in the economy through indirect and induced impacts. 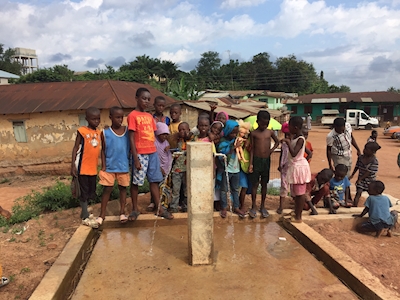 The project aims to meet the 30 years' water needs of more than 300.000 people living in Akim Oda and Akwatia regions. Thanks to the 2 million m3 open reservoir built, it will be possible to provide potable water to the region even during the dry season. Providing easy access to safe and potable water, the project will make a significant contribution to the socio-economic development of the regions. 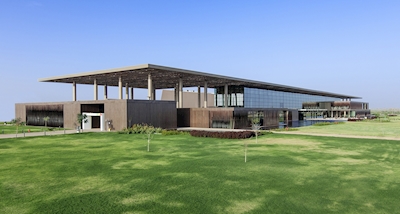 The Dakar International Conference Center, which was built in order to host the 15 th Francophone Summit held in the country in 2014, is also home to international fairs and congresses. The project, which draws attention with its distinctive architectural style, was chosen by "Engineering News Record (ENR)" in 2015 as the "Best Project of the Cultural Area World". We provided EUR 49 million loan where the project cost was EUR 73 million.

The Japoma Douala Sports Complex Project is one of the projects that the Government of Cameroon has put on its agenda in order to develop necessary infrastructure/superstructure to host the Africa Cup of Nations 2021. The project will not only fulfill the requirement of Africa Cup of Nations 2021 but also will contribute to the Cameroon’s sports infrastructure as well as the qualified sportspeople. 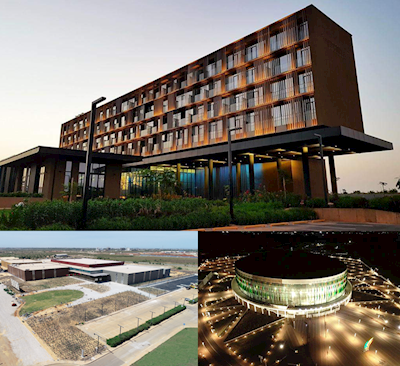 The Busıness Hotel of Cıcad, Expo Center of Cıcad and Dıamnıadıo Multı-Functıonal Sport Center Project has been constructed in the Diamniadio Region located 35 km away from the capital city of Senegal, Dakar, near to the Dakar International Conference Center which was also supported by our Bank. Within the scope of the Project an expo center with 20.000 m2 closed area and 5 rooms, a business hotel with 150 rooms capacity, and a multi-functional sport center with a capacity of 15.000 audience in basketball seating order together with a capacity to host tennis and boxing competitions and events such as concerts and conferences. The Business Hotel which was built in the new business and culture center of Dakar, Diamniadio region, will be very useful with its high quality services for its guests especially the ones who visit the region with several investment and business purposes. Sport Center on the other hand, will support the development of several sub-group of sports activities mainly basketball. Additionally, Expo Center will support cultural and economic development of the country by hosting national and international events. We provided EUR 134 million loan where the project cost was EUR 147,5 million. 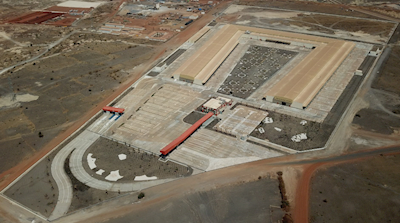 The Market of National Interest and Truck Station Project has been constructed in the Diamniadio Region located 35 km away from the capital city of Senegal, Dakar. Within the scope of the Project, products coming from the local producers will be sold to the retailers and wholesaler and the local products will be processed, packed and exported efficiently. For this purpose, a large scale of Market has been built with a capacity of 147 sales office, 8.868 m3 cold room and 325 car park capacity parking area. Improving the insufficient transportation and storage facilities will made the use and distribution of products more efficient and increase the availability to these products between regions. Therefore the existence of such facility will lower the volatility of prices. Additionally, for the purpose of providing a safe area to the large trucks and form a dry and fresh for the stocked products, a Truck Station has been built with a capacity of 320 m³ cold room and 180 car park capacity. We provided USD 88,9 million loan where the project cost was USD 105,9 million. 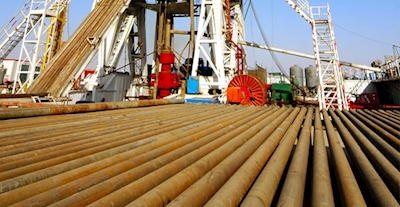 We allocated loan with a total six years maturity to the Ministry of Finance and Economy in Charge of Industry of the Republic of Djibouti to finance the export of Geothermal Drilling Equipment.

Export of Ferrosilicon Plant and Equipment 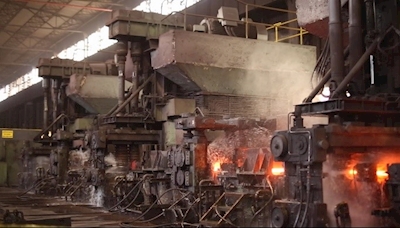 We provided buyers’ credit for a total maturity of 8 years for the export of Ferrosilicon Plant and Equipment. 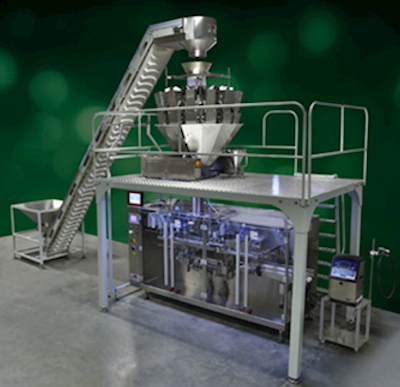 We utilized loans whose maturity ranges from 6 months to 5 years for the export of various capital and consumption goods. 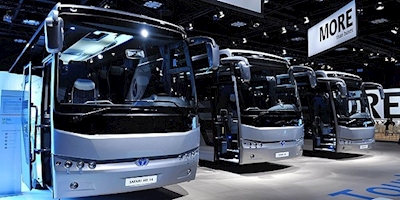 Our interest rates are competitive even in France…

We insured and discounted export receivables, deferred up to 3 years and raised from the export of buses. 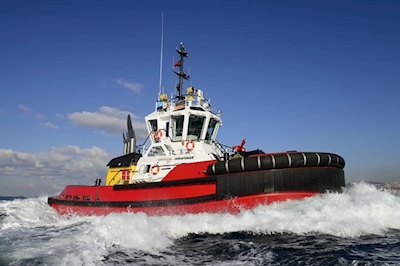 We insured and discounted export receivables, deferred up to 5 years and raised from the export of Tugboat.

With the Tugboat’s commencement of operations in the Atlantic ocean, we opened new era in our “buyers’-suppliers’ credit” portfolio. 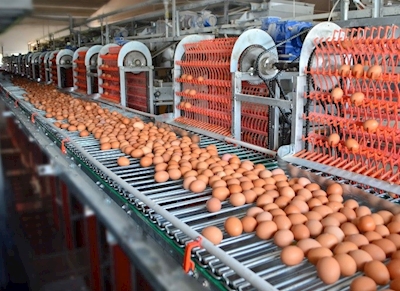 We never led our firms exporting to every continents stand alone, including in Latin America.

We insured and discounted export receivables, deferred up to 4 years and raised from the export of “Chicken Cage System” to Paraguay.